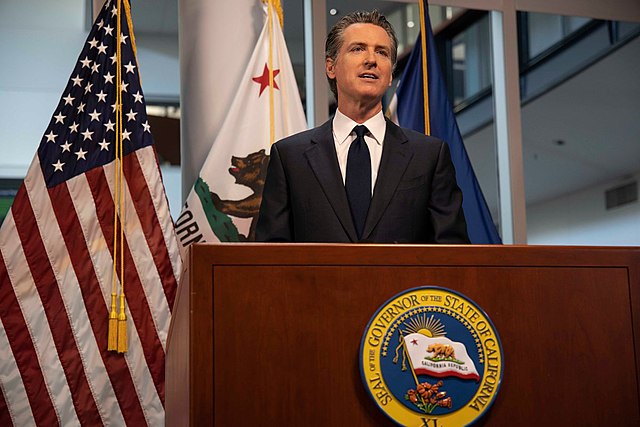 Office of the Governor of California, Public domain, via Wikimedia Commons
Like Freedom Press? Get news that you don't want to miss delivered directly to your inbox

The posturing between two high-profile governors on opposite ends of the political spectrum has been heating up in recent days, foreshadowing a possible head-to-head matchup for the White House in 2028 or even as early as 2024.

Republican Florida Gov. Ron DeSantis and Democratic California Gov. Gavin Newsom are both running for reelection as chief executive of their respective states this November, but both have been taking shots at one another on the national stage as well.

DeSantis has seen his already surging popularity among conservatives at home in Florida and around the country get a significant boost in the last week after he sent 48 illegal migrants to progressive ultra-wealthy retreat Martha’s Vineyard.

DeSantis turned the national spotlight toward one of the Democratic Party’s weakest issues in the run-up to the crucial national midterm elections in November. The GOP base has been energized by the attention focused on Joe Biden’s open-borders disaster, and independent voters have also tuned in to the ongoing humanitarian and legal crisis occurring daily at the nation’s southern border.

Newsom decided to get involved this week by demanding that the U.S. Department of Justice investigate DeSantis along with Republican Texas Gov. Greg Abbott for what he called “federal kidnapping” criminal violations. He also accused the GOP governors of using migrants as “political pawns.”

Newsom even challenged DeSantis to a debate on Friday, leading to further jousting between the two political camps.

DeSantis is on the national campaign trail again, with scheduled appearances on Sunday in Kansas and Wisconsin campaigning alongside GOP gubernatorial candidates.

While DeSantis has seized upon the highly relevant immigration crisis, Newsom has decided to make abortion a triggering topic for his liberal base. California is one of several blue states that have been touting their aggressive pro-abortion policy stances since the Supreme Court overturned the Roe v. Wade decsision in June, sending the power to regulate or ban abortion back to the states individually.

Newsom has launched an ad campaign in red states that promotes abortion and dares to invoke the Bible as support. Inviting women to travel to California to obtain abortions, the ads depict women who appear stressed and even wearing handcuffs. Some quote Mark 12:31, attempting to equate “Love your neighbor as yourself” with a legal right to kill unborn children.

It appears likely that the 2024 race for the White House could be a re-match between Joe Biden and Donald Trump. However, neither has officially said they plan to run. Biden’s advancing mental and physical problems have led many in his own party to openly speculate that it would be best for Democrats if he chooses to retire to his Delaware basement on a permanent basis.

In the event that either Biden or Trump, or both, decide not to run in 2024, DeSantis and Newsom are odds-on favorites to be in the center ring.