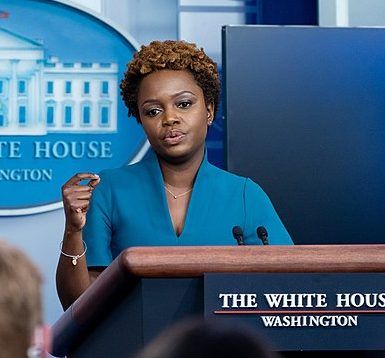 The Biden administration has been widely criticized for a lax immigration policy that has fueled a crisis along the nation’s southern border. Amid a record number of undocumented immigrants crossing from Mexico into the United States, many prominent Republicans have urged President Joe Biden to actually visit the border to witness the situation firsthand.

Thus far, he has avoided making such a trip — but some pundits expressed hope that this week’s visit to Arizona would include a stop at the border.

White House press secretary Karine Jean-Pierre dashed any such hopes in response to a reporter’s question on Monday. She offered a rambling response when asked whether there were “any plans” for the president to visit the border.

“I want to be very clear here,” Jean-Pierre said. “The president’s trip tomorrow is about the American manufacturing boom we’re seeing all across the country thanks to, again, his economic policies, again, more than we’ve seen in his, you know, almost two-year term, more than 700,000 jobs, manufacturing jobs, that have been created just here alone in the United States.”

She subsequently fielded a related question from another reporter who wanted to know if Biden would commit to visiting the border at some point next year.

Instead of addressing the question directly, Jean-Pierre took the opportunity to attack Republicans.

Claiming that GOP lawmakers are more concerned with “playing political games” on the issue of immigration, she asserted: “We believe the question, again, as I was just answering to your colleague in the back, is that, what are congressional Republicans going to do to actually deal with this issue instead of doing political stunts?”

She went on to assail Republicans for “going to the border and talking about things that are not going to actually deliver and keep our border safe,” suggesting that they should instead “help the president get the funding that he requested.”

Although attacking the GOP is a politically expedient move for the White House, there is no denying the fact that border agents have encountered a staggering increase in the number of illegal border crossings thus far in the Biden administration.

In El Paso, Texas, for example, locals are seeing their community inundated by undocumented immigrants in a wave that shows no signs of slowing down.

Resident Luis Lujan said that Americans are increasingly afraid for their own safety as potentially dangerous migrants sleep on city sidewalks. He blamed the spike on the current administration’s policies.

“Ever since Biden said, ‘Come on over,’ they’re coming over,” Lujan concluded. “This was like a freeway to them.”