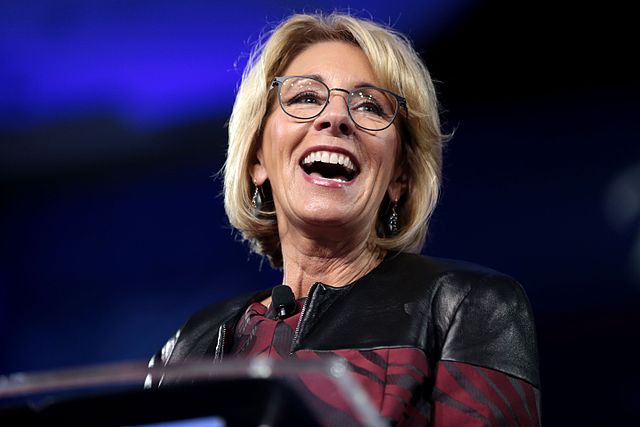 A growing number of Americans are advocating for increased parental rights when it comes to the public education system.

The debate was a major issue in last year’s Virginia gubernatorial race and GOP Florida Gov. Ron DeSantis has prioritized a new law limiting the so-called “woke” curriculum being pushed by teachers unions and leftist politicians.

Most recently, former Secretary of Education Betsy DeVos addressed the matter in an address on Capitol Hill this week.

After rallying GOP lawmakers to approve new measures meant to protect school choice, she sat down for an interview with the Washington Free Beacon in which she denounced the prevalence of leftist cultural themes within public school lessons.

“Families in many cases are being subjected to a religion they don’t subscribe to,” she said. “The schools they are fleeing will need to either pay attention and make changes or serve families that decide they want to have that experience.”

Specifically, she cited “radical gender theory” and “critical race theory” as two of the most objectionable tenets of modern education.

With public backlash against teachers unions on the rise, DeVos asserted that the time is right for conservatives to put forward an alternate agenda that includes school choice for parents. Her speech in D.C. advocated for the Educational Choice for Children Act, which was proposed by U.S. Sen. Tim Scott (R-SC) and would provide funding for families to send students to a preferred school.

“Now is the time to strike,” she said. “I suspect it won’t be too long before we see a universal provision advanced in Florida.”

For his part, Scott said he has long been a proponent of school choice, but the response to widespread school closures during COVID-19 and the corresponding negative impact on education has presented the best opportunity yet to achieve a consensus on the topic.

“For more than a decade, I’ve worked to advance school choice because I know that if a student’s education is not limited by their ZIP code, they can achieve anything in our great land of opportunity,” he said, “Unfortunately, this is a bipartisan issue everywhere except Washington, D.C.”