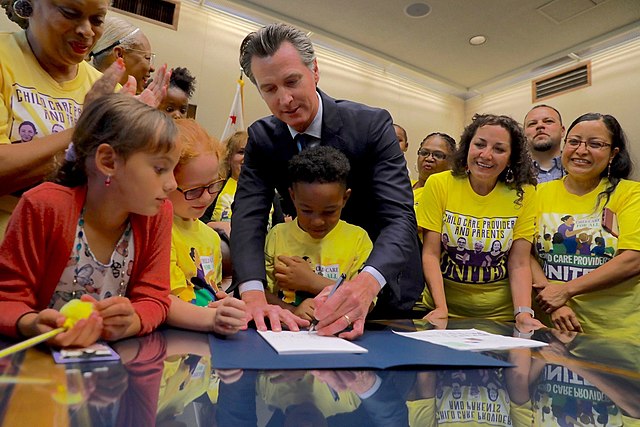 Government of California, Public domain, via Wikimedia Commons
Like Freedom Press? Get news that you don't want to miss delivered directly to your inbox

Responding to a debate challenge from California Gov. Gavin Newsom (D), Florida Gov. Ron DeSantis (R) called the Democrat out on his failed state, saying he isn’t sure that California could even keep the lights on for a debate.

During an interview with Fox News’ Sean Hannity, the Florida governor turned down Newsom’s challenge, saying “my actions speak louder than my words.”

“I don’t know if they can reliably keep the power on so you go all the way up there and have a debate and then what ends up happening if they can’t keep the lights on?” DeSantis told Hannity. “So, you know, we’re happy with what we’re doing. You know what I do though, Sean, my actions speak louder than my words. There’s certain people that will preen and do that, I understand, we get things done in Florida.”

Newsom has consistently attempted to elevate himself on the national political stage via repeated attacks on DeSantis, possibly as part of an effort to position himself for a presidential run — as many commentators have speculated that the California governor could be President Joe Biden’s replacement in 2024.

Just last week, Newsom sent a letter to U.S. attorney general Merrick Garland claiming that DeSantis — who is a lawyer — had taken part in “kidnapping” when he transported 50 illegal immigrants to Martha’s Vineyard.

Without providing any evidence to back up his claims, the California Democrat argued that the illegals were sent with “the intent” to be “humiliate[d] and dehumanize[d].”

Of course, there is plenty of evidence to refute Newsom’s claims. Even left-wing news outlet MSNBC reported that the illegal immigrants were “not angry with Ron DeSantis” and that they were “actually thanking him for having brought them to Martha’s Vineyard.”

The Florida governor also responded to Newsom’s claims during a press conference on Friday afternoon, mocking him and remarking that the excessive amount of hair gel that Newsom uses was “interfering with his brain function.”

This prompted the California governor to scour Twitter to dig up a tweet from a month ago from disgraced journalist Dan Rather in which he suggested that CNN’s new CEO, Chris Licht, should host a debate between DeSantis and Newsom — using that post to attack the Florida governor and challenge him to a debate.

“Hey @GovRonDeSantis, clearly you’re struggling, distracted, and busy playing politics with people’s lives,” the California governor claimed. “Since you have only one overriding need — attention — let’s take this up & debate. I’ll bring my hair gel. You bring your hairspray. Name the time before Election Day.”

The Left Rushes To Play Cleanup After Biden Declares Pandemic ‘Over’