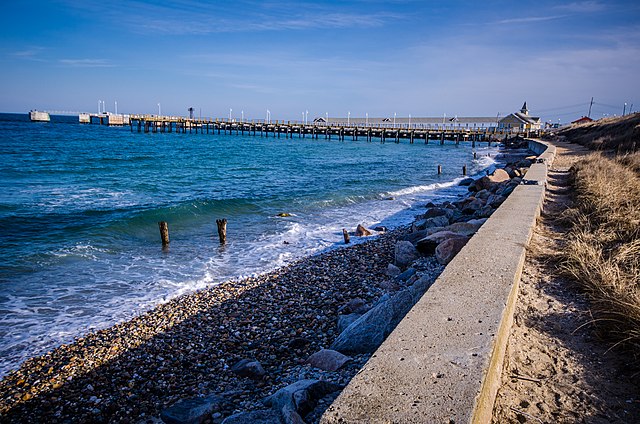 m01229 from USA, CC BY 2.0 , via Wikimedia Commons
Like Freedom Press? Get news that you don't want to miss delivered directly to your inbox

Christina Pushaw, a spokeswoman for the DeSantis reelection campaign, is calling on supporters of President Joe Biden on Martha’s Vineyard to open their empty vacation homes to shelter illegal immigrants that were just transported to the island.

This week, Florida Gov. Ron DeSantis (R) shipped around 50 illegal immigrants via two private planes to Martha’s Vineyard — an island located just off the coast of Massachusetts that is widely regarded as a liberal elite vacation destination, which is home to former President Barack Obama, who owns a nearly $12 million property located on the island.

In response to DeSantis’ actions, leftists are fuming — condemning the Florida governor for daring to send illegals to Martha’s Vineyard, despite the fact that they openly support Biden’s expansive Catch and Release program that transports thousands of illegal immigrants across the country to working- and middle-class American towns.

Pushaw tweeted out a video of one Democrat complaining about the governor’s move and claiming that the island does not have the space for the illegal immigrants. The campaign spokeswoman then pointed out that Obama’s home has plenty of space.

“Wow! This Martha’s Vineyard Democrat doesn’t seem very welcoming or progressive. ‘We don’t have housing for 50 immigrants.’ Uh, don’t the Obamas have a 10 bedroom mansion there? That will fit half of them,” Pushaw wrote.

Pushaw then went on to point out that all Biden voters on Martha’s Vineyard ought to open their mansions, which are usually empty except for during the summer months, to the newly arrived illegal immigrants.

“Martha’s Vineyard claims to be a ‘sanctuary’ jurisdiction that welcomes illegal aliens,” she tweeted. “Most of those multi-million dollar mansions are summer homes that are vacant most of the year. They can be used to house thousands of illegal migrants. Time to walk the walk, Biden voters.”

For example, the Obama family does not live primarily in their Martha’s Vineyard mansion. The family spends the majority of their time at their primary residence in Washington, D.C. — an estate located in the exclusive Kalorama neighborhood which cost approximately $8.1 million.

The empty Martha’s Vineyard mansion would be perfect to house up to 15 illegal immigrants, as the home boasts seven bedrooms and eight and a half bathrooms. The property itself is 29 acres, with a private beach, with plenty of space for the remaining 35 illegals to be housed in makeshift facilities.

The overwhelming majority of the residents of Martha’s Vineyard are wealthy liberals who voted against former President Donald Trump in the last two elections, according to the New York Times. Towns across the island voted between 65% and 82% for Hillary Clinton in 2016, and voted between 70% and 88% for Biden in 2020.

Despite their support for Democrats and their advocacy for illegal immigrants — with many businesses on the island displaying a sign including the phrase “we stand with immigrants, with refugees” — Martha’s Vineyard has been almost entirely immune from the effects of illegal immigration, until now.