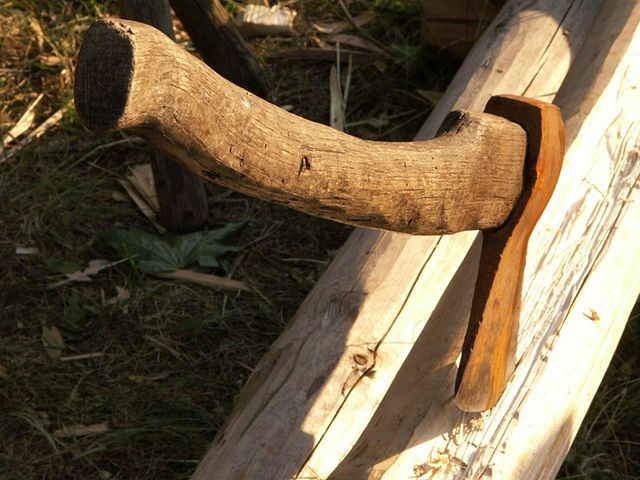 A shocking viral video shows a man terrorizing a McDonald’s in New York City, pulling an ax out of his backpack and wildly swinging it and destroying the restaurant while waving it at other customers.

At around 2:25 a.m. on Friday, a man wearing blue shorts and a black tank top — later identified as 31-year-old Michael Palacios — appeared to get into an altercation with another man at the Delancey Street McDonald’s on the Lower East Side in Manhattan.

Before Palacios can actually start a fight, two other men physically stop him from approaching the other customer. Palacios then shoves the two men out of the way, and punches a man dressed in white. The other two men then retaliate, and all three men begin punching Palacios repeatedly in the head.

Shockingly, Palacios just stands there calmly and takes the punches, completely unphased as he leans against a garbage receptacle. After they finish hitting him and back away, he appears to shrug, then takes his backpack off.

Palacios pulls an ax out of his backpack, causing the men to immediately back away with their hands up, though they had already stepped back and ended the altercation.

One man can be heard begging him, “Bro, please!”

Palacios then begins swinging the ax, smashing a table and hitting a wall near where several onlookers were standing. He then proceeds to shatter a large glass partition.

The suspect slaps and punches two men, knocking one to the floor.

A witness to the chaos can be heard saying on the video: “That’s why I keep my knife on me all the time, man. S— like this, you never know. God knows, man.”

Palacios turns to a young woman who was sitting at a nearby table, pointing the ax at her, and bashing the table.

The suspect then walks toward one of the men who had punched him earlier, threatening him with his weapon while another young woman tries to shield him from a potential ax attack.

The two-minute video ends as Palacios exits the McDonald’s.

According to reporting from The New York Post, Palacios was later arrested and charged with criminal mischief, three counts of menacing and two counts of criminal possession of a weapon. The Post noted that the suspect also has a prior arrest for resisting arrest.

While no one was actually injured during Palacios’ rampage, there were thousands of dollars’ worth of damage done to the fast-food restaurant, according to police.

A spokesperson for the Office of the Deputy Commissioner, Public Information released a statement to TODAY, which read: “Upon arrival of officers, witnesses at the location reported that the suspect got into a physical dispute with three unknown males inside of the location. The suspect removed an ax from his backpack and menaced the unknown males. The suspect intentionally caused property damage to the establishment. The individual was taken into custody by responding officers. A search incident to a lawful arrest, an additional knife was recovered from his backpack.”

Paul Hendel — the owner-operator of the destroyed McDonald’s — also released a statement.

“The safety of our customers and crew is always our top priority,” Hendel said. “We are shocked by these acts of violence committed in our restaurant, and we are cooperating fully with the authorities in their investigation.”